AT THE TRANSPORTATION CENTER 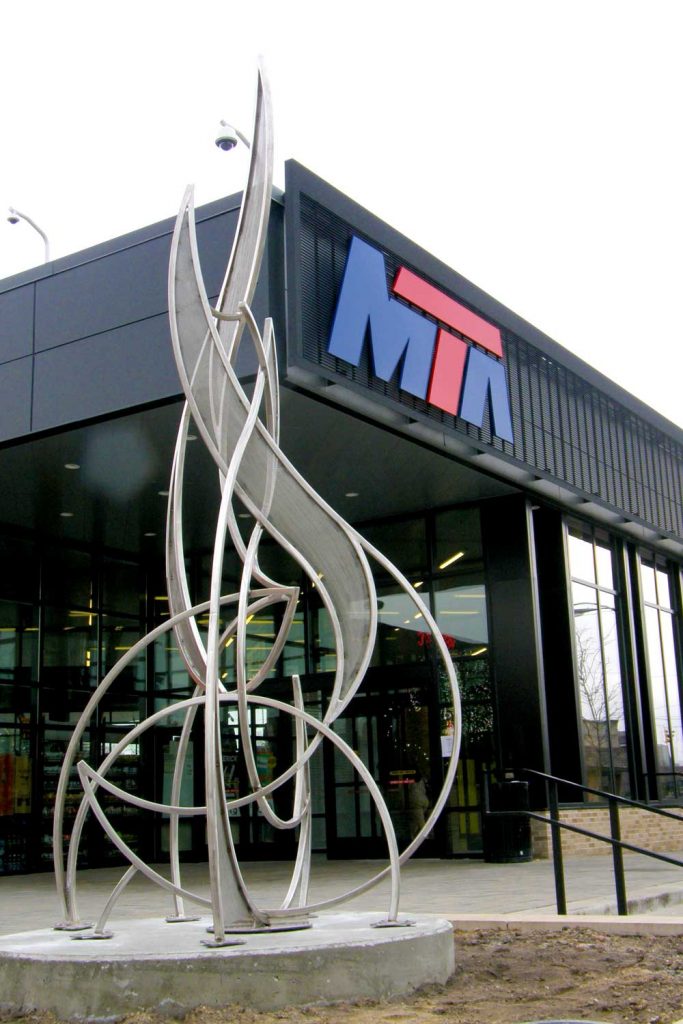 Welcome to the Northrup-Abrams Transportation Center

The MTA’s role as a public transportation provider in the City of Flint and in Genesee County is an important one. With over 17,000 people a day using the transit center to get to various locations in and out of the county, the MTA Northrup-Abrams Transportation Center plays a key role in the lives of Genesee County residents.

When plans were being made to redevelop the City of Flint, the decision was made to transition the Northrup-Abrams Transportation Center into a community facility. It was decided to concentrate on the facility being a memorial for civil rights through artwork that would showcase important periods in the history of civil rights and celebrate the men and women who made a difference in the fight for equality. This led the MTA to include a request for funding for art as part of the $6 million program to renovate the facility. The MTA commissioned art for the downtown facility as part of the overall community effort to attract individuals from all over the state to come to downtown Flint as a destination. 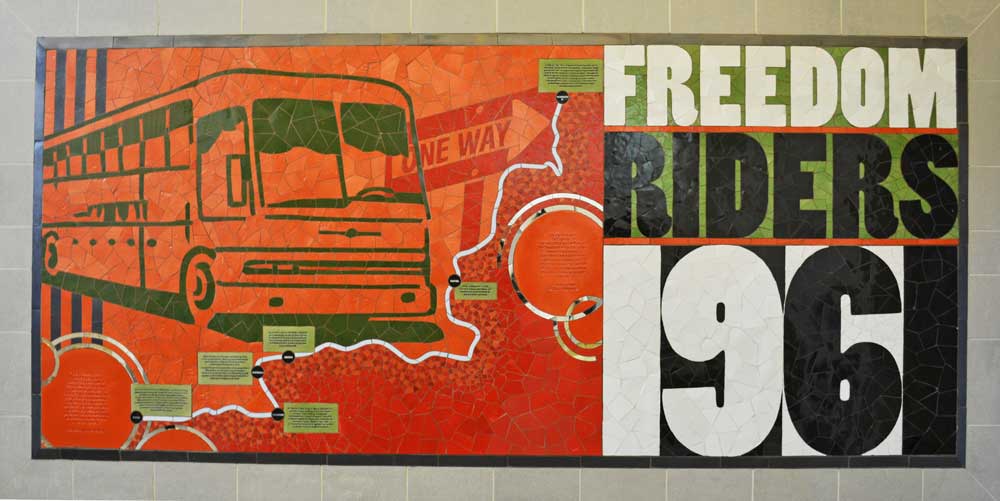 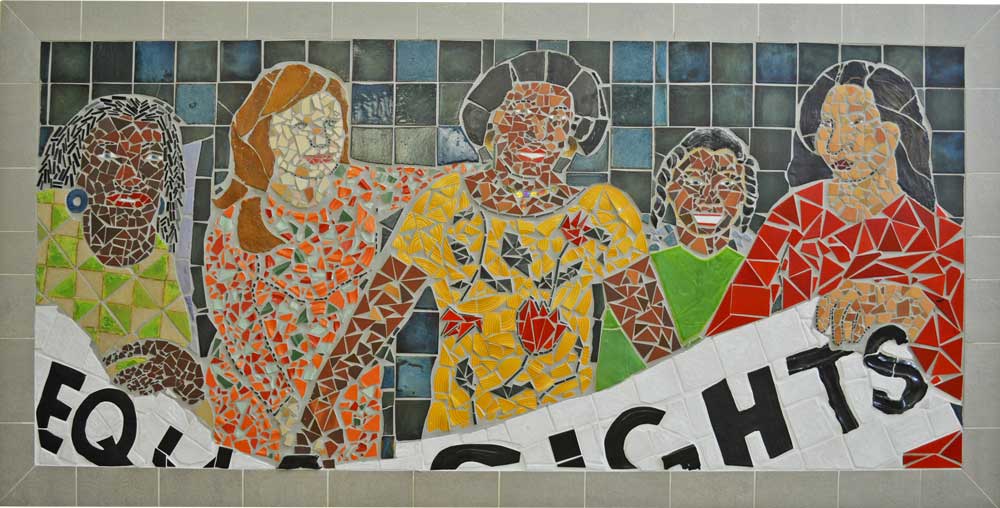 Funds for the “Art in Transit” Program came from State and Federal discretionary grants. These grant funds were restricted for use on the artwork and could not be used for other transit purposes. No local Genesee County tax dollars were spent on the program. The artwork was created by Michigan artists, most of whom are from the area.

The MTA contracted with the Greater Flint Arts Council (GFAC) and established a committee to act as a facilitator for this program. Through much time and effort by the group, nineteen different forms of media were created, including a sculpture of civil rights pioneer, Rosa Parks, two mosaic tiles and fourteen stained glass windows which showcase pivotal moments in civil rights history. 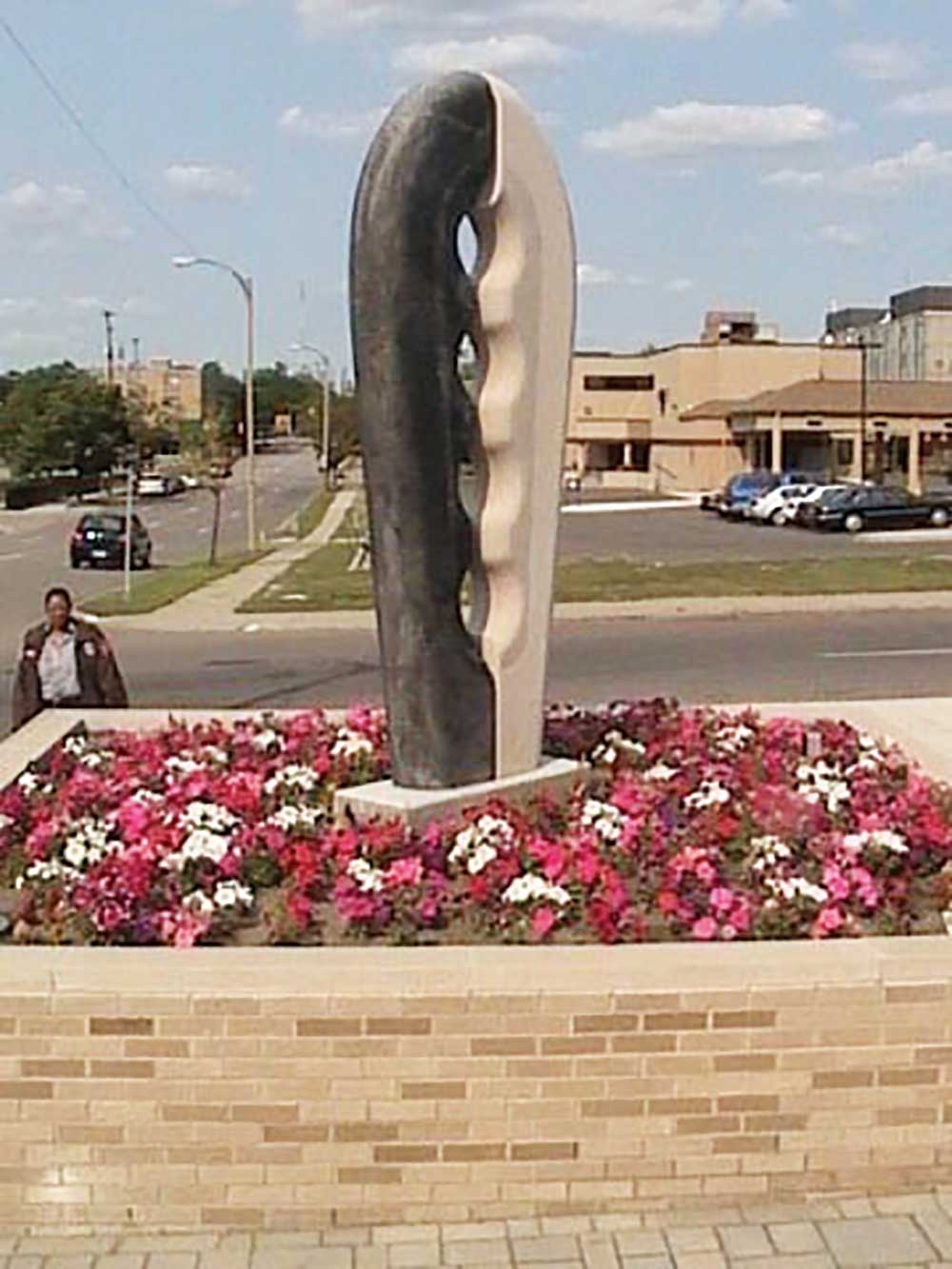 We hope you enjoy all that the Northrup- Abrams Transportation Center’s artwork has to offer. We are proud of our contribution to the revitalization of Flint and will continue our efforts to bring the best in quality service to the community.

The reflection of LED lighting on the stainless steel sculpture represents the eternal flame, a prayer sent up to God for the deliverance of men from prejudice and warfare. Located in the front planter at Harrison and Second Streets.

Cultural elements make up this design which pays homage to the civil rights struggle by Arab Americans made necessary by the anti-Arabian sentiment which grew from the attacks on the United States, September 11, 2001.

This is a symbolic representation of the struggle for LGBT people to stand up and be recognized as equals in society where many would prefer them to remain hiding.

Latino elements are mixed with portraits of Latino American Civil Rights leaders Caesar Chavez, Hector Garcia and Justice Sonia Sotomayor. The combination of birds and butterflies represents the “migrants” as they all migrate.

This representational piece depicts the new role seniors play in our society. Once shunned as too old, today, seniors are seen as contributing to society as volunteers; taking leadership roles in the communities and sharing their wisdom, expertise and mentoring.

Represents the famous freedom ride in 1961 when a bus full of African American men embarked from Washington DC on a journey through the southern states. Located in the men’s lavatory.

Depicts the unity of women across the U.S. and beyond which brought about cultural awareness and legislation which redefined the role of women in modern America. Located in the women’s lavatory.

This work of art depicts the disparity between life for average Americans and persons with disabilities and calls for constant efforts to improve their quality of life. The flag in the middle is commonly used internationally on ships indicating, “We are disabled…communicate with us.”

This colorful abstraction with the count-less colors and patterns depicting infinity pays homage to the single most comprehensive legislation in the history of civil rights.

This representational collage depicts the role of transportation in the African American Civil Rights Movement beginning at the bottom with Sojourner Truth, the Freedom Riders bus, Martin Luther King’s “I have a Dream” speech and ending at the top with President Obama, Air Force One and a tribute to the first African American (Buford 1983) on the space shuttle.

Located in the interior front lobby, the statue of a courageous Rosa Parks shows her strong and determined spirit. By refusing to give up her seat on the bus for a white person, Rosa Parks inspired the Montgomery, Alabama bus boycott in 1955, considered to be the beginning of the modern African American Civil Rights movement.

This work of art containing hand blown roundels made by the artist, depicts elements from Asian cultures celebrating their struggle for equality in America.

Americans in the Military

The graphic depiction of the traditional “tug of war” often associated with military basic training paired with powerful words depicts the injustices born by many members of our military and celebrates the advances made for the protection of their civil rights.

This representational piece shows the famous Statue of Liberty which has welcomed future Americans at our border since 1886, and documents the history of legislation which controls the acceptance of immigrants to the United States.

Role of the United Auto Workers in Civil Rights

This is a graphic depiction of the role the United Auto Workers has played in the protection of civil rights for American Laborers.

With the use of neutral tones, this sculpture represents equality of the races of all people in America and a joining together in love while maintaining unique cultural heritages. Located at the rear exterior planter on Second and Wallenberg Streets.

This artwork is a depiction of the history of the civil rights protections for American laborers.

This work of art depicts the struggle for equality by American women using symbols associated with justice.

This colorful work of art depicts the first struggle by native Americans for equality and justice in America.